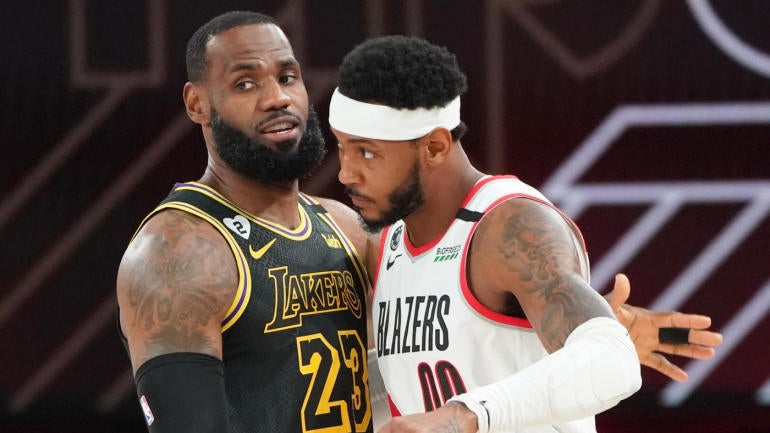 The Los Angeles Lakers will sign free-agent forward Carmelo Anthony to a one-year deal, his manager tells ESPN’s Adrian Wojnarowski. The deal will presumably be for the veteran’s minimum, the same amount he has played for over the past two seasons with the Portland Trail Blazers.

The signing represents a career-long goal for Anthony and close friend LeBron James. The two have played together for Team USA, but never in the NBA. James even told Howard Beck in 2016 that he would take a pay cut to play with Anthony, Dwyane Wade (who remains retired) and Chris Paul (who was out of the Lakers’ price range this offseason). James will still make his maximum salary this season.

The Lakers made a number of other moves Tuesday, reportedly agreeing to a deal with free-agent guard Malik Monk, who will bring needed shooting to the team. Also, Los Angeles added Kendrick Nunn on a two-year deal while Talen Horton-Tucker re-signed with the Lakers on a three-year deal worth $32 million.

The Lakers entered free agency with only four players under guaranteed contracts, thanks to their blockbuster trade for Russell Westbrook. That created a desperate need for depth, particularly among players that can shoot. Anthony, seemingly, will fill that void. He shot 40.9 percent from behind the arc last season, but perhaps more importantly, 41.8 percent of his shot attempts came from behind the arc. He came off the bench full-time for the first in his career last season, and offensively, he adjusted to his new role well.

Where he always struggled has been on defense, and those issues persisted last season in Portland. When Anthony was on the floor, the Blazers allowed 115.8 points per 100 possessions last season. That was the second-worst mark on the team behind second-year forward Nassir Little. When he sat? They improved by allowing only 112.1 points per 100 possessions. That tied with Damian Lillard for the lowest figure among Blazers players when they weren’t in the game. No version of the Blazers were good defensively, but they were at their worst with Anthony in the game.

The Lakers have been built around defense ever since Anthony Davis and Frank Vogel joined the team in 2019. It will be up to them to figure out how to take advantage of Anthony’s offensive gifts while protecting him on the defensive end of the floor. If they can do so, they will give Anthony his best chance yet to win his first career championship.